Scientific Сooperation Between Russia and India
On January 11, MSLU hosted the XII Meeting of the Joint Russian-Indian Working Group on Cooperation in the Field of Science and Technology under the auspices of the Ministry of Science and Higher Education of the Russian Federation in a hybrid format.

New Dimensions of Interaction with Chile
On December 1, 2022 the MSLU Center for Ibero-American Programs arranged a meeting of students and academic staff with the outstanding Chilean artist Emiliano de Rokha.

Delegation of the Embassy of Angola in MSLU
On December 9, 2022, our university received y a delegation of the Embassy of Angola, headed by Minister-Counselor Gaspar Cushtodia Domingos da Silva. On behalf of the Moscow State Linguistic University, the guests were greeted by Irina Shokina, Head of the International Cooperation and Internationalization Department, and Ekaterina Pokholkova, Dean of the Faculty of Translation and Interpreting.

MSLU Signs an Agreement with the Federal Georgian National and Cultural Autonomy in Russia
On November 18 in the House of the Peoples of Russia, Moscow State Linguistic University signed a cooperation agreement with the Federal Georgian National-Cultural Autonomy in Russia, a Georgian diaspora public organization, during a round table dealing with the support and development of languages of the peoples of Russia. 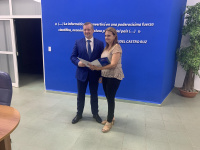 Persian Language Classe at the Center for the Language and Culture of Iran
November 17 to 29, Nakhide Kalashi of Al-Zahra University (Islamic Republic of Iran) gave a number of workshops on verbal communication in Persian for Iranian students of MSLU at the Center for Language and Culture of Iran. The workshops were organized by Associate Professor of the Department of Oriental Languages ​​of the Faculty of Translation and Interpreting, PhD in History Alexander Polishchuk. 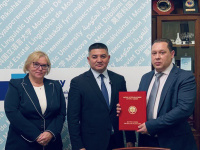 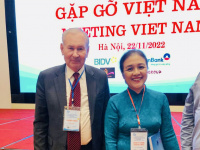 MGLU Hosts a Meeting with Brazilian Ambassador and Screens Film ‘Simonal’
The Brazilian Embassy in Moscow, the Cinema Club project and MSLU have organized a lecture delivered by Ambassador Rodrigo Baena Soares and a showing of the movie ‘Simonal’.

MSLU Rector Irina Kraeva Interviewed by Vietnam’s Central TV Channel
The interest of Vietnam's leading TV company in MSLU is primarily due to the success of the Vietnamese section of the MSLU Translation and Interpreting Department and the high level of long-term academic cooperation between the two countries.

MSLU Holds a Meet-the-Artist Event with Turkish Author Mehmet Hakki Yazici
On September 28 as part of the "Translation Environment" project the University held a meet-the artist event with Turkish writer Mehmet Hakkı Yazıcı. The event was sponsored by the Center for Turkish Language and Culture and the Research Laboratory for Comparative Literature and Artistic Anthropology (LitVedLab).

MSLU Professors Participate in Istanbul International MUN
Andrei Dzhunkovsky, head of the Department of Applied and Experimental Linguistics, and Aleksandra Melina, a postgraduate student of the Department, took part in the Model UN, organized by Best Diplomats in Istanbul.

‘Russia-Serbia’ Young Interpreter School Over
In Moscow a large-scale project called ‘Russia-Serbia School of Young Translators’ has come to a close. The project was organized by the Rudomino All-Russian State Library of Foreign Literature with the support of the Ministry of Culture of the Russian Federation. The project was co-sponsored by the Translation and Interpreting Department of the Moscow State Linguistic University.