On November 9 and 10, MSLU took part in the 50th Moscow International
Exhibition "Education and Careers" which was held in the Gostiny Dvor
Exhibition Center.

MSLU among Top Ranking Universities of the World.
On September 19, 2019, the Three University Missions Moscow International
University Ranking (MosIUR, or the Moscow ranking) released a list of top 1,200
universities in the world, with MSLU ranking within the 801-900 band.

Busan Delegation Visits MSLU
On July 31, MSLU hosted a delegation of the Busan University of Foreign Languages (BUFS),
the Republic of Korea, headed by its president, Dr. Chun Kiyeon. They met with MSLU
authorities, including MSLU Rector Irina A. Kraeva.

Malta’s Ambassador Visits MSLU
On July 23, 2019, MSLU Rector Irina A. Kraeva had a meeting with Ambassador
Extraordinary and Plenipotentiary of the Republic of Malta to the Russian
Federation Mr. Pierre Clive Agius.

Cuban Embassy Delegation Visit To MSLU
On July 10, 2019, MSLU Rector Irina Kraeva had a meeting with Counsellor of the Embassy of Cuba Gustavo Cobreiro Suárez, former Rector of the University of Havana (Universidad de La Habana). The parties emphasized close and long-standing cooperation and discussed prospects for developing the relationship.

Congratulations To The 2019 Graduates!
From July 1 to July 9, 2019, MSLU held degree ceremonies for 1328 graduates, including 863 bachelors, 306 masters, 128 specialists, and 31 post-graduates across all its departments and institutes. Following the university tradition, the diplomas were presented by MSLU Rector, Irina Krayeva.

MSLU Rector Awarded the Order of "Unity"
MSLU Rector Irina A. Kraeva was awarded the Order of “Unity” that commemorates the 60th anniversary of the United Nations. She received the award on her birthday, July 8, from Mr. Amelchenko, Secretary General of the European Committee for Awards and Prizes and a member of the Writers' Union of Russia.

UN and MSLU Sign MOU
On June 24, 2019, MSLU and the United Nations Organization signed an MOU on cooperation in preparing candidates for language competitive examinations or LCEs. The ceremony took place in the historical Assembly Hall of the University in 38 Ostozhenka Street. 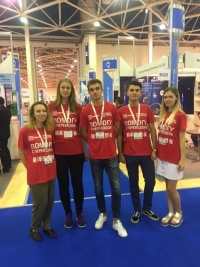 The Art Of Comics In Norway
On May 30, MSLU students could attend a lecture from the Norwegian Publishing House NO COMPRENDO, a publisher of comics and graphic novels.

MSLU Alumni Event in Vietnam
On March 5, the Russia-Vietnam Friendship Society hosted an event for MSLU alumni from Vietnam and MSLU delegation.